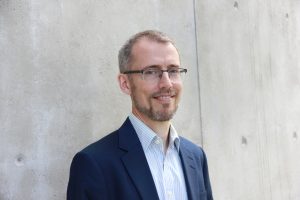 This time I aim to entertain and inform you with a bird’s eye, bibliographic overview of Swedish Life Cycle Assessment (LCA) research. If you would like to draw attention to some progress which researchers at an Swedish Life Cycle Center partner organisation are making in developing new methods and other developments in my next update, please feel free to contact me: gregory.peters at chalmers.se.

Where is Sweden in the world of LCA?

A few years ago, someone claimed in print that very little LCA comes out of Sweden, but this country has maintained an important place in the world of LCA. Search liberally for peer-reviewed articles about life cycle assessment, ecological footprints, carbon footprints or water footprints which have a Swedish author, and you will find over a thousand publications since 2016 (on the Scopus database alone). In a quick tally I performed for this newsletter, Swedish authors contributed to 2.8% of all such articles published globally, a big slice for a country that is only 0.1% of the global population and 0.6% of global GDP.

Where are we? The top three most common workplaces for authors of this research are the three Swedish Life Cycle Center universities: Chalmers University of Technology, KTH Royal Institute of Technology and SLU Swedish University of Agricultural Sciences. Partner institutes RISE Research Institutes of Sweden and IVL Swedish Environmental Research Institute, along with the universities of Lund and Stockholm are next, followed by a long list of other universities, which demonstrates the broad appeal of such methods across the Swedish research scene. Looking just at Scopus, the national LCA league table has remained fairly stable since at least 1995, with some notable exceptions such as Umeå University. Umeå has tripled its LCA research publication rate since 2016 – by far the fastest growth among Swedish institutions.

What sorts of tools do we use? There are many ways to answer this, but I’ll keep it simple here. In Figure 1, I’ve graphed the years 2016-2020, since some 2021 publications are still trickling into the Scopus database. LCA is the most popular of the tools shown in the figure.  Its single-indicator cousin, the carbon footprint, is hugely popular per sig but the water footprint seems to be gaining popularity. Ecological footprints and chemical footprints remain niche topics in the Swedish academic literature, but there are big new investments in the latter, so watch this space!

What application areas do we write about? There are too many ways to sort that basket, but one of my favourites is what you can call a “Korg 70 000 BC” analysis. It’s named after an old TV show and board game about Neanderthals, because your basic priorities are to find food, water, clothing and shelter. I also looked for transport and waste management papers because a more serious review I published some years back pointed these topics out as the most popular applications of LCA. Notice the logarithmic scale in the figure. These six application areas cover a majority of the LCAs that Swedish researchers perform, and all seem to be growing, with the possible exception of clothing. Perhaps the recent drop-off visible in Figure 2 marks the end of Mistra Future Fashion (2011-2019), or perhaps the momentum which that huge research program created remains and we just saw a one-year dip? Measured as a percentage per year, waste management and food production stand out as areas that are growing faster than the overall publication rate.

This is not a critical academic literature review, just something I did for fun for this medium, but statistics like these suggest that Swedish researchers (and the Swedish Life Cycle Center partners in particular) are moving forward on a wide front and playing an important role in the steady global growth of LCA methods and applications. 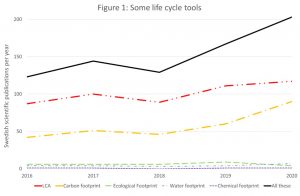 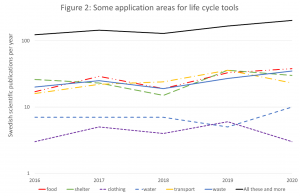