On March 4 the Nordic working group for LCA climate and buildings met to discuss definitions of carbon neutrality in the building sector and the concept of carbon handprint. The group also had the chance to listen to Tarja Häkkinen, SBE research and Harpa Birgisdottir, Department of the Built Environment, Aalborg University Copenhagen, that presented results from a joint project between Denmark, Finland, and France about the concept of carbon handprint. A carbon handprint is the positive environmental aspects linked to a product, in this case a building.

The Nordic working group for LCA, climate and buildings is one part of the Nordic Dialogue Forum for LCA, climate and buildings (länka till project) which is developed in collaboration with the Nordic building authorities. The purpose is to give input to Nordic harmonization of life cycle assessment of climate emissions from buildings with the aim to reduce the building sector’s climate emissions. The Dialogue Forum consists of a working group and a network with expertise from the Nordic building authorities, academia, and industry. The group meets four times per year to discuss current issues and give input to the harmonization process.

At this meeting the focus was to have group discussions on the topics: carbon neutrality and carbon handprint. To introduce the discussions about carbon handprint the group listened to Tarja Häkkinen, SBE research and Harpa Birgisdottir, Department of the Built Environment, Aalborg University Copenhagen, that presented results from a joint project between Denmark, Finland and France. 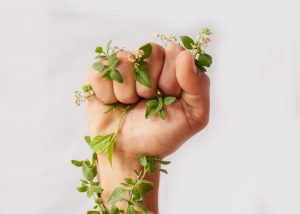 The concept of carbon handprint is, in short, a potential way of presenting the positive environmental aspects of a product (in this case a building). The possibility to use carbon handprint as a way of showing a buildings positive impact or removal of carbon could motivate building professionals and/or building owners to be more ambitious and implement better solutions. The presentation was followed by group discussions about the concept to give further input to the authorities regarding the possibilities and risks with the concept.

During the discussions both positive aspects with the concept was lifted: “Lowering footprint may not be enough. We also need to bind carbon from the atmosphere. Reporting of positive effects can be encouraging for smaller companies (who could be afraid of reporting their footprints).” And some concerns regarding the concept and its application “there is a huge risk of greenwashing” and “time perspective, we have to have measures that take the time perspective into consideration. “

The importance of time scales and how to take that into consideration in the definition and in the regulations was lifted as important issues to handle. One question that was raised was “Should the future production be discounted?”. The need for clear definition and measures for neutrality was also lifted as an important part to agree on if the concept is going to credible and useful.

During the next meeting in the group the topic will be digitalization and digital tools with a focus on BIM (Building Information Model) and LCA. But, before that meeting the Nordic working group, together with the Nordic building authorities, invites to an open webinar on the May 27th with updates and current issues from the authorities, academia, and industry. More information will come. If you want to be sure to get an invite, welcome to sign up on the Nordic dialogue forum mail-list below. Last years webinar can be found here.

Read more about the Nordic Dialogue Forum for LCA, climate and buildings

Join us online for an interactive webinar about the Nordic approach on reducing the building sector’s climate impact, and external…

Modelling and Simulation in LCA

Join us online for a discussion about harmonization of building regulation and low carbon emissions in the Nordic Countries, and…

The UN Environment has recently launched the new Life Cycle Initiative (LCI) Strategy, 2017-2022. A strategy to scale up and…